The origin of Andhra Pradesh State Road Transport Corporation (A.P.S.R.T.C) dates back to June, 1932, when it was first established as NSR-RTD (Nizam State Rail & Road Transport Department), a wing of Nizam State Railway in the erstwhile Hyderabad State, with 27 buses and 166 employees. During the past 80 years, it has registered a steady growth from 27 to 22,713 buses with 773 bus stations, 215 Depots and 1,881 bus shelters. A.P.S.R.T.C under the present name was established on 11th January 1958 in pursuance of the Road Transport Corporations Act 1950.

The Corporation’s buses cover 83.19 lakhs KMs. and carry 136.13 lakhs people to their destinations every day. They connect 23,388 villages to all major towns and cities in A.P which constitutes 95% of Road Transport. A.P.S.R.T.C operates to City and Mofussil areas. The Corporation’s buses also ply to important towns and cities in the neighboring States of Tamilnadu, Karnataka, Maharashtra, Goa, Odisha and Chhattisgarh.
Vehicle Tracking & Passenger Information System (VT&PIS) in Andhra Pradesh State Road Transport Corporation (APSRTC)
Andhra Pradesh State Road Transport Corporation is implementing VT & PIS project to address the critical issue of road congestion by adopting state-of-art technologies and attractive, convenient, comfortable, value added services to encourage the usage of bus services instead of individual personal vehicles.   APSRTC aims to bring about this modal shift by improving the perceived image of its services.
The project was awarded to M/s CMC Ltd., Hyderabad. The overall scope of the implementation will consist of design, development, testing, installation, commissioning, training, operations, and management of facilities for a period of five years. This project is planned with Vehicle Tracking System for about 3502 buses, Establishment of Data Center, Control Centers, Passenger Information System, Communication Sub System, Incident and Emergency Management System.
VT & PIS will cover core systems such as Vehicle Tracking System, Real Time Passenger Information System and Central Control Centers. Core technologies include GPRS, GSM, Geographical Positioning System (GPS), Display units and Information & Communication Technologies.
Benefits of introducing VT & PIS
Building intelligence into the transport system brings in the convergence of technologies providing a synergetic transformation in the commuter experience. VT & PIS provides benefits in terms of Reduced waiting time, Increase the accessibility of the system, Increase the passenger base, Reduce the operational costs, Improve traffic efficiency, Reduce traffic congestion by providing actual data for route planning and route rationalization.
Broad objectives of the VT&PIS Project
VT & PIS Project has been implemented in the state transport buses to track and monitor the movement of buses on real time basis and to enable communication of the arrival timings of buses at the bus stops. The system provides Real-time Multi-lingual Passenger Information (Bus Timings, ETA, Promotional Messages, Routes, Bus Stop data etc.) on LCD/LED Display Boards at Bus Stops, Bus Terminals and other identified locations.
The users get instant access to information related to bus schedules, ETA etc., at bus stops and bus terminals through SMS and internet. It has also helped in establishing meaningful instant two-way interaction facility between Driver/Conductor and Control centre. Obtaining online real time information on bus operations and management has become easy. Also, monitoring of breakdowns and the related information has help in effective service delivery.
Functionality of VT & PIS
GPS based Vehicle Tracking Equipment will be installed in the buses identified to be covered under the Project. The service/route in which each bus is operated will be assigned to each Vehicle Tracking device.
The geographical positional coordinates (Latitude and Longitude) are captured by the Vehicle Tracking equipment and transmitted to the Central Data Center at predetermined intervals, through GPRS, for which one SIM card will be installed in each Vehicle Tracking Unit. Based on the route on which the bus travels and its current position, the estimated time of arrival of the bus at all the subsequent stages will be calculated by the application which will be installed in the Data Center. This information will then be sent to the LED/LCD displays concerned, through GPRS for which a SIM card will be installed in the PIS controller of each LED/LCD display Unit. This information is then displayed by the Display Unit. Schematic diagram of the functionality is given hereunder: 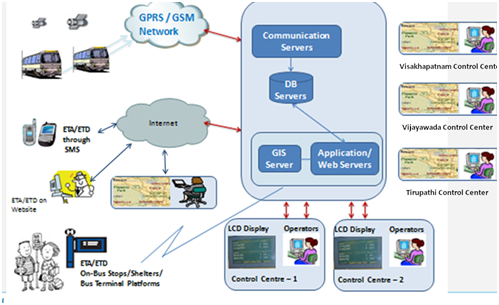 Passenger Information System (PIS):
LCD/LED Display Boards installed at Bus Stations, Bus Shelters and other locations displays real time information of arrival and departure of the Buses at the Bus stops and Bus Stands.
Mobile Application and SMS facility:
Those with smart phones can download a mobile application or check out the APSRTC website to find when the bus will come at their stop. Those who do not have smart phone,   can send an SMS to the central call center and a return SMS will be sent to them with the details of bus no, route no and Estimated Time of Arrival(ETA). 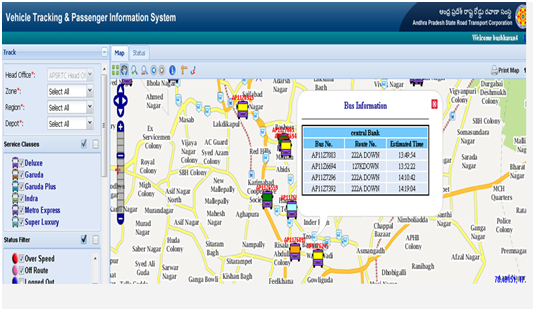 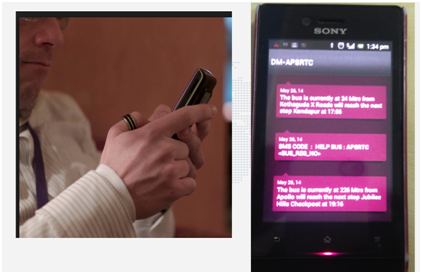 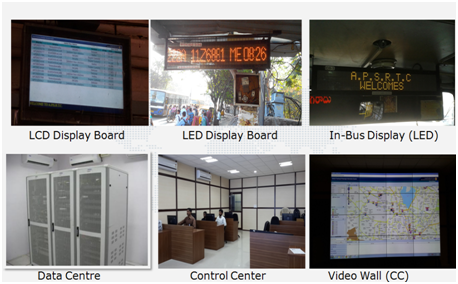 Depot Application:
Depot Level Applications to support the above systems enable the monitoring and control of the system at the depot level and hence manage the operations in a better way. The current schedules are assigned using the web application at depots.