The UK government has given official approval to the use of driverless cars. Soon the prototypes of such cars would be seen on the roads of four British cities namely-Greenwich, Coventry, Bristol and Milton Keynes. The UK’s regulatory environment now sets it apart as a premium location for developing new technology, with tremendous potential for reducing accidents and making traffic flow more smoothly.

A government agency Innovate UK, (which funds and connects innovative British businesses to support sustainable economic growth) along with partial help from the UK government, has created three projects-the GATEway, UK Autodrive and Venturer. These projects also had the support of local governments and private firms and will start in the four cities to judge the reaction of the common public as well as the success of this technology.

“Driverless cars are the future. I want Britain to be at the forefront of this exciting new development, to embrace a technology that could transform our roads and open up a brand new route for global investment. The trials present a fantastic opportunity for this country to take a lead internationally in the development of this new technology.”

A driverless golf buggy has already been tested in Greenwich which had people’s mixed reactions. It was called the meridian shuttle. Many devices like radar, camera, light detectors and ultrasonic sensors were used to operate the vehicle. Besides all these, it was made to ply on a programmed route by selecting the route on a touch pad. Phoenix Wings was behind the design ad creation of this vehicle. This was used to help people park cars in the right place and avoid congestion and also to connect people to the public transports such as tubes, from their home or work areas. 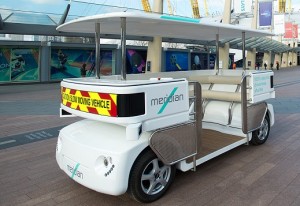 A made-in-Coventry two-seater vehicle, with the union jack printed body is also to be unveiled. This will be linked to a Macbook Pro which will have 3-D maps of the journey it has to undertake.

Tim Armitage, project director of UK Autodrive project and associate director in the Advanced Technology and Research Group at Arup, which is heading the project says,

“This project is as much about generating public acceptance as it is about the technology. One of the things we’ll be doing is to gauge public opinion and monitor how that is changing and how they perceive the benefits and also the threats of a driverless vehicle.”

The project can only see the heydays if it is completely accepted and adopted by the public without any fear or apprehensions. But this is no cake walk as a survey conducted by u-switch.com (a price comparison and switching service) reveals. The people of UK are not very happy with the idea of driverless cars plying on their roads. The survey was conducted with 953 people and nearly half of them were not happy with the idea of travelling in a driverless car. People said that they couldn’t trust driverless cars and are “horrified” that such cars would soon be seen on the British roads. The main challenge that the projects will face is convincing people for using such cars.

Keeping the positive attitude upright UK Autodrive project is planning to test two kinds of driverless vehicles- pod vehicles for public conveyance and passenger cars for personal use. The passenger cars will be designed by three participating car manufacturers-Jaguar Land Rover, Ford and Tata, all three of them being car manufacturing giants.

The pods will have 360 degree peripheral vision and will be programmed to look out for and react to pedestrians and cyclists. They will have a top speed of 10 mph but it will also depend on the crowd of pedestrians around them. They will ply under very controlled conditions in order to convince the public of them being safe in the pods.

These pods can be used in hospitals, airports,tube stations etc. for the convenience of the common public.

Likewise, the Venturer project will test BAE System’s autonomous 4×4 Bowler Wildcat on private and public roads in the city of Bristol beginning early next year and for a period of three years. It will focus on the insurance aspects of such cars and the reaction of the public. The GATEway project will focus on testing the autonomous vehicles in public areas.

“The GATEway project has the most relevance to global megacities, such as New York, Paris or Shanghai, where urban growth presents challenges to mobility”

Main objective is to include “car manufacturers, systems and software suppliers and organizations that run transport services, all of whom will want to develop, test and validate system performance in a safe and suitable environment,” Reed explains. 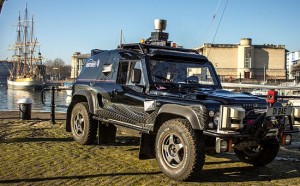 This technology will completely transform UK’s transport system. Armitage predicts , “I can imagine a world where you hire a driverless car from, say, Google or Amazon but not own it. You’ll be paying for the mileage. And it’s a good thing because you get the right car for whatever your needs are. After you use it, it will be used by someone else. That makes for more efficient land use, because there will be fewer car parks in the city and more parks.”

If these projects are successful we can imagine a world with better mobility and less land consumption which will in turn lead to less traffic congestion.

Kriti Ranjan is a regular contributor of Telematics Wire. For any feedbacks, please write to kriti.ranjan@telematicswire.net