BY MATT PEAK
Earlier last month, a self-driving truck made a 35-mile trek on U.S. Route 33 in Ohio. Two weeks before that, the same truck drove roughly 120 miles on Interstate 25 in Colorado with a trailer full of Budweiser beer in tow. These journeys come on the heels of other self-driving truck demonstrations earlier this year, including one in which a convoy of Wi-Fi connected semi-autonomous trucks traversed northern Europe. In these demonstrations, humans managed the vehicles’ systems and served as a backup if anything went wrong, but the trucks, with their array of advanced sensors and software, did most of the driving.
Self-driving trucks supported by human managers are on the verge of becoming a commercial reality. With this reality will come myriad benefits for drivers, fleet operators, and the public alike.
These benefits range from lower fuel costs, to reduced traffic accidents and fatalities, among others. Altogether, a 2015 report by Morgan Stanley “conservatively” estimated the freight transportation industry’s potential savings of using self-driving trucks at $168 billion annually. Expected savings came from labor ($70B), fuel efficiency ($35B), productivity ($27B) and accident savings ($36B).
As self-driving trucks advance, regional actions – including the real-world demonstrations in Colorado, Ohio, Europe, and elsewhere – serve valuable roles. Altogether, there are five categories of actions whereby regions have proven themselves effective in helping to advance autonomous vehicles: Developing technologies, deploying infrastructure, providing capital, orienting public policies, and educating the public. An acknowledgement of the value that regional efforts can play in advancing autonomous vehicles is illustrated by the U.S. Department of Transportation’s current effort to identify and designate “Automated Vehicle Proving Ground Pilots” around the country.
Yet, while regions around the world have stepped forward to facilitate demonstrations of self-driving trucks, no region has yet to address how these trucks, whose primary purpose is commerce, and whose primary needs are safety and efficiency, can work with other connected and autonomous technologies to further all three of these elements. 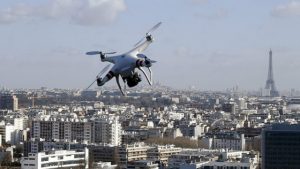 Options for such interconnected operations among automated vehicles abound. Take Unmanned Aerial Systems (UAS), better known as AERIAL DRONES . We all know drones as those small, pilotless aircraft that help protect our country by performing military operations while keeping pilots out of harm’s way. In other iterations, drones make greatTOYS FOR CHILDREN and adults alike. Yet drones are also being investigated as tools for various industries, including for delivering products and packages to consumers.
Recent developments indicate that, like self-driving trucks, this vision for drones is on the verge of becoming a commercial reality. For instance, earlier this month, Amazon made its first commercial autonomous drone delivery in Cambridgeshire, England. The delivery was part of a private trial and took just 13 minutes from click to delivery. It came just over three years after the company unveiled its Prime Air program aimed at delivering packages using small drones.
Amazon isn’t alone in this pursuit. Other companies developing platforms to deliver products via automated aerial drones include the Chinese internet retailer JD.com, who has a fleet of drones flying autonomously to reach rural communities, and Domino’s Pizza, who is testing drones to deliver fast food in New Zealand. This past July, 7-Eleven delivered Slurpees, doughnuts, and other food to a customer in Reno, and on the campus of Virginia Tech, Google delivered Chipotle burritos via drone.
Aerial drones, though, are only the tip of the iceberg in what could be a broader value chain of interconnected, service-oriented autonomous vehicles. Companies like Case IH and New Holland are developing fully autonomous tractors that will revolutionize the agriculture industry, and Caterpillar’s and Komatsu’s autonomous haulage trucks can revolutionize the mining industry. As the much larger “Internet of Things” (IoT) emerges, literally billions of mundane items, such as stoplights, thermostats, and elevators, will soon contribute to this prospective value chain as they communicate and coordinate with connected and autonomous vehicles.
While the potential for interconnected operations is there, the reality is far from it, as only a few disparate companies have examined the opportunity. Daimler produced a vision for a concept delivery van with roof mounted drones, Local Motors produced a concept car with a traffic-identifying drone mounted on its rear, and Cincinnati-based Workhorse Group is working with the University of Cincinnati to launch delivery drones from the roof of its trucks. This past Thursday, Ford announced that it was investigating ways in which drones could help autonomous vehicles solve navigation problems. None of these or other companies have explored or modeled broader, systemic approaches to multimodal autonomy, such as those that synthesize and optimize the operations of Class 7/8 trucks, drones, agricultural equipment, haul trucks, and other IoT machinery.
Not only is corporate activity to advance multimodal autonomy limited, but so too are regional activities. While my company, Peak Strategy Partners LLC, has identified, characterized, and rated 114 (and counting) different regional efforts around the world that are taking actions to prepare for and/or advance the arrival of autonomous vehicles, none of these efforts have thus far focused on how a broad array of multimodal autonomous vehicles can interact with each other.
Yet regional actions to facilitate and maximize the potential of the interplay between automated vehicles could yield benefits that dwarf those that Morgan Stanley estimated for self-driving trucks.
Imagine a scenario whereby a farmer’s crop is harvested by autonomous tractors and quantified by wireless sensors.  It’s subsequently collected via pilotless drones and packed by small autonomous pods onto specially designed trailers. These trailers are then attached (via small autonomous pods) to and pulled by self-driving cabs that have integratedAERIAL DRONES to help the vehicle (and others around it) identify and avoid potential road hazards that are beyond what the vehicle’s sensors can detect. Aerial drones then periodically offload and deliver the onboard crops to customers as the vehicles’ routes lead past various market endpoints.
Such a scenario holds the promise of better connecting and facilitating the development of rural and remote markets, reducing transport costs in a way that leads to higher margins for producers (such as farmers) and lower prices for consumers, expediting the supply chain to reduce time-to-market (potentially assisting with crop yield), enabling a systematic approach to collision avoidance, and increasing jobs as the service and manufacturing sectors grow to manage the autonomous vehicle network and produce robotic and other supporting technologies.
Regions are uniquely qualified to undertake the types of actions that can help solve lingering challenges around these new, systematic approaches to mobility, establish the familiarity and confidence required to commercialize them, and help unleash these benefits.  The lack of such actions to date presents a large opportunity for regional leaders who seek to be technologically progressive. By working with a variety of stakeholders representing an array of autonomous vehicle platforms, these leaders can help establish and accelerate the deployment of what could be a truly revolutionary new model for cooperation among multimodal autonomous vehicles that facilitates commerce, enhances roadway safety, and redefines mobility.
Matt Peak is Managing Partner of Peak Strategy Partners LLC, a Los Angeles based consultancy that focuses on automotive, transportation, and clean energy technologies.
Please note: The article was first published at ‘The Hill’

The cost of connectivity – What consumers are telling us 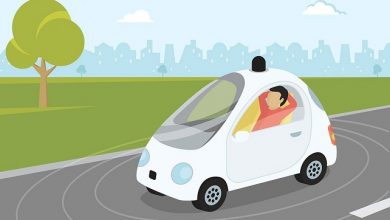