Daimler AG has unveiled the concept of its self-driving truck ‘Mercedes-Benz Future Truck 2025’ at the 2014 International Commercial Vehicle Show(IAA) that is capable operating without assistance from drivers on highways. This truck is equipped with radar sensors and camera technology is built on Highway Pilot system that resembles the autopilot system on an aircraft.

“The challenge now is to leverage this momentum and to continue our open dialogue with all parties involved, so that in ten year’s time the autonomously driving truck will indeed have become an accepted feature on our roads” – Wolfgang Bernhard, Head of Daimler Truck Division

Following is a demo video showing all the relevent features of the truck:-

Radar sensors and in-cab camera
The Mercedes-Benz Future Truck 2025 is not, for instance, part of a platoon. It does not need to be daisy-chained to other vehicles either. Radar sensors and camera technology enable the Future Truck to drive autonomously, independently of other vehicles or central control stations. Its technical features are thus crucial in giving the Mercedes-Benz Future Truck 2025 its outstanding capabilities as an autonomous vehicle. For Mercedes-Benz the culmination of this is the highly intelligent “Highway Pilot” system, which resembles the autopilot on an aircraft. Networking with other trucks or passenger cars extends its abilities further, but is not necessary for autonomous driving.
A radar sensor in the lower area of the front end scans the road ahead at long and short range. The front radar sensor has a range of 250 m and scans an 18-degree segment. The short-range sensor has a range of 70 m and scans a 130-degree segment. The radar sensor is the basis for the proximity control and emergency braking safety systems already available today.
A stereo camera installed above the instrument support behind the windscreen keeps the area ahead of the vehicle in view. This is currently the location of a mono-camera if optional Lane Keeping Assist is ordered. The range of the stereo camera is 100 m, and it scans an area of 45 degrees horizontally and 27 degrees vertically. The stereo camera of the Mercedes-Benz Future Truck 2025 identifies single- or two-lane roads, pedestrians, moving and stationary objects, all objects within the monitored area and also the road surface. The camera recognises everything that contrasts with the background, and is therefore also able to measure clearances precisely. The front stereo camera also registers the information on traffic signs. In addition to object and distance recognition, the stereo camera recognises lane markings as a major function for autonomous lane guidance.
Blind Spot Assist: more safety when turning and changing lane
These sensors form the heart of the new Blind Spot Assist system from Mercedes-Benz. The radar sensor modules are arranged in such a way that they cover the area parallel to the truck over the entire length of a tractor/trailer combination or drawbar combination. In addition this strip is extended forwards to two metres in front of the truck.
Blind Spot Assist warns the truck driver about other road users not only when turning; it also warns about imminent collisions withstationary obstacles – for example signs or lamps – and serves as an assistance system when changing lane.
V2V and V2I – communication between vehicles and the outside world
The “Highway Pilot” is ideally partnered with V2V and V2I networking. Every vehicle equipped with this in the near future will transmit continuous information to its surroundings. This includes vehicle position and model, dimensions, direction of travel and speed, any acceleration and braking manoeuvres and the bend radii negotiated.
The frequency of information transfer depends on the vehicle speed and the intensity of any changes in its movement. It varies between one message per second when cruising to ten times this interval when changes are significant. Transmission is via WLAN technology, using the standard Europe-wide G5 frequency of 5.9 gigahertz. The basis is the ITS Vehicle Station (Intelligent Transport Systems and Services) on board the vehicle.
Daimler said the Future Truck 2025 should be on roads in 10 years time.
Source: Daimler
[whohit]World Premiere: Daimler ‘Self-Driving Truck’ could hit the roads in next 10 years [/whohit]
Tags
Daimler Self-Driving 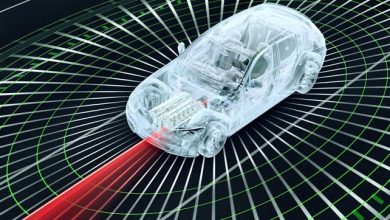