Mr. Sundar Pichai and Mr. Travis– two very renowned names in the industry- recently summarized the future of the connected cars and driverless cars in India very subtly.History speaks for itself and in this case, Mr. Pichai and Mr. Travis based their comments on the fact that India has always been a cash cow for multinationals; giving business rather than proven innovation and scalable acceptance of the technology. Let’s look at an interesting comparison between two popular automotive companies- Mahindra & Mahindra and Tesla motors.

It’s hard to believe at first but it was an Indian company to actually put an electric car on such a commercial scale before Tesla or even Nissan. But even after the early mover advantage Reva couldn’t create a global impact like Tesla when it comes to the‘Green energy revolution’ in the automotive industry and the reasons are pretty obvious:

India faces challenges because of lack of adoption to the global phase shift in the automotive industry. The technology development is radically being improved at lower prices, there are new high-tech companies providing solutions which are driving the shift faster than predicted by analysts, the business model around new age mobility and the increasing demand of low cost of ownership is driving new services and revenue models and a few governments have already drafted policies around the connected car industry bringing out clear constraints and bottlenecks for the connected vehicle industry.

While India is still in the transformation stage from BS IV to BS VI, there aren’t many tech-companies building solutions around the connected vehicle industry. The 2015 startup bubble is a proof that most companies who raised billions in funding were mostly e-commerce service based companies generating billions in revenues. In 2017, however a few companies have started to pivot themselves in this direction. This state of affair is coincided by an inevitable Ironical situation. All the multinationals who are building solutions for global automotive companies are doing this by investing in the ‘human resource’ of India. Most of the R&D work by these tech-companies is being done in India. But we don’t have a solution yet. It isevidently clearthat the connected vehicle evolution will take its sweet time because of an unavoidable cycle of socio-economic & political effects in India.

There are the three most important factors ruling a smooth integration of connected Vehicle industry (V2X) in to any geography; these are: 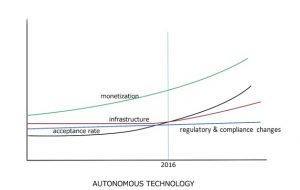 The graph shows that since the term ‘Autonomous Cars’ has become a trend, the growth rate of these factors has been rather slow. As fast as the technology is progressing the integration factors are growing at a much slower rate. It was only in 2016 when Driverless Car became the center of attraction in the connected car Industry.

The answer is not necessarily to pump in more investment into connected car or autonomous driving technologies, but to invest more thoughtfully.As quoted by a lot of reports today’s car has the computing power of 20 personal computers, features about 100 million lines of programming code, and processes up to 25 gigabytes of data an hour. Today it’s about the survival of these automotive companies too. If they are not progressive, in adapting to the new age software and electronic solutions they will eventually die. And that is the reason that today all the global automotive companies have partnered with famous software firms to develop the technology and infrastructure for the connected car industry. Tech-giants like Google and Apple have invested billions to improve the technology while companies like Ernst & Young, PwC, Morgan Stanley are working towards drafting business strategies for these companies and enforcing the compliances with the governments of various countries.

So where do these automotive companies come in picture? Companies have realized that consumers are more software driven today. Hence there have been consortiums formed globally to collaborate with software companies and come up with a new business model and revenue streams.One of the reports by PwC concluded that 70 percent of global connected service sales come from premium brands. By 2022, that number will fall to 50 percent, at the expense of falling margins. Although connected services will generate sales of US$155 billion, most of this value will be offset by falling sales from legacy features such as navigation, entertainment, and safety systems. These trends will contribute to a squeeze in profits for OEMs and suppliers. Higher R&D expenses will not convert into higher overall sales. On the supply side, by 2030, profits available to traditional automakers and suppliers may drop from 70 percent to less than 50 percent of the industry total. The balance may be captured by new entrants, including suppliers of new technology, mobility services, or digital services. 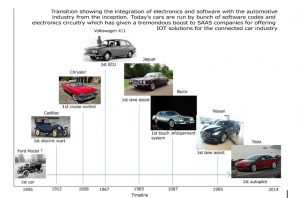 From the inception of first commercially scalable car Ford Model T, the automotive industry has evolved from all mechanical to software and electronics integrated industry.

There is a lot of debate on the business model around the connected car industry but the results are not concrete. In my current company, I am heading the Artificial Intelligence department where we are building the modern age Autonomous car and ADAS systems. And I have identified following few points which might help other automotive companies to monetize their products and services:

Their current rate of innovation in India is too slow to keep up with all the new players entering the field. “The top five OEMs spent $46 billion on R&D in 2015, an 8 percent increase year-over-year”, quotes a report by PwC. Globally, however, the success has been elusive in the field of connected car and autonomous car industry and there is very little noticeable differentiation between players. Take example of a driverless car. 80% of the hardware and codes are same for every company.

India needs to up its game if it wants a piece of one of the biggest phase shifts in the automotive industry. The Indian automotive companies should start to differentiate the options and opportunities based on the capabilities that automakers/vendors already have in generating profits and customer loyalty.

To be sure, the connected car, and especially the autonomous car, will eventually emerge as the “fifth screen” in people’s lives: the next media consumption nexus point after movies, televisions, personal computers, and mobile phones- the focus should be oninnovatingthe driving experience and creating frictionless access to the car’s many features and seamless interfaces to technological partners.

Navigating through the Telematics Ecosystem Quagmire

How Fleet Management Will Transform the Future of the Transport Industry